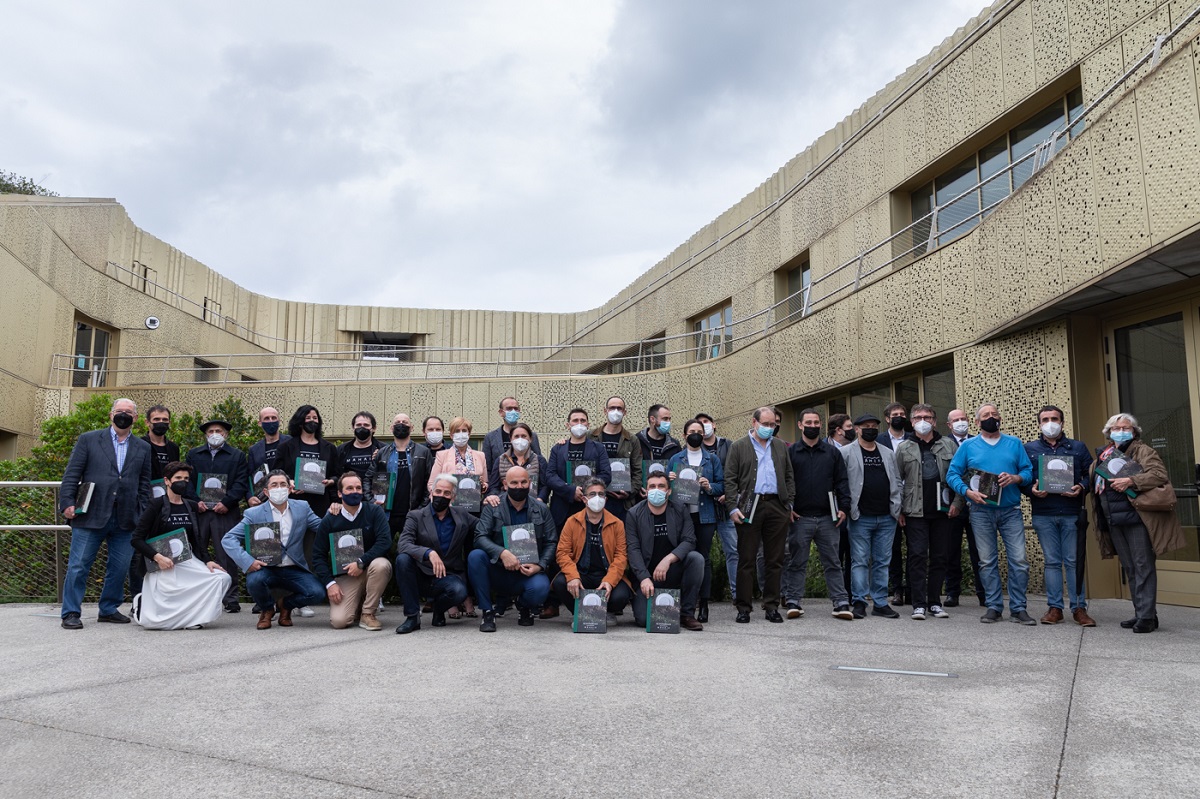 Mahaia Kolektiboa is a collective of chefs committed to the evolution of Basque cuisine, supported by Basque Culinary Center. In April 2021 they presented "Sutondoan", a book linked to the local products, region and gastronomic culture. 40 years after the explosion of what became known as new Basque cuisine, this collective takes a step forward to perpetuate the legacy received. A book in the age of digital communication and social networks? That’s right, because at Mantala we like both traditional and innovative things, as is the case with the book “Sutondoan”, which combines both visions of Basque cuisine: the more traditional and the more modern. 40 years after the foundation of the new Basque cuisine, the Mahaia collective, formed by 16 chefs, is here to update the legacy received from the great masters and take a leap forward. One step further. “Local products are our group's defining feature, as well as being open, because we are not closed to anyone”, they state. The book “Sutondoan” is the Mahaia collective’s declaration of intent, so to speak. In it, they show the group’s link to the product, the region and the local gastronomic culture. “It’s a book that brings together the tradition and innovation of Basque cuisine, acknowledging the work of small producers, preserving the knowledge of a generation under an innovative perspective”, they say. This work is one of the first dishes to come out of the kitchen of Mahaia Kolektiboa, a collective formed by 16 restaurateurs, the children of a hybrid generation who are already highly renowned. In the book the producers, farmers or fishers are the main characters. Because without people there's no gastronomy, but of course without a product there isn’t any either. These 16 restaurant industry professionals have received an important legacy from their predecessors, but they have also contributed their own innovative vision in their dishes and creations.  Put differently, it's like someone who learned to make their grandmother's croquettes, but who sometimes also likes to prepare a sushi dish in the purest Japanese style. Members of the collective include Aitor Arregi, Igor Arregi, Pili Manterola, Gorka Txapartegi, Jon Ayala, Iñigo Lavado, Xabier Gorrotxategi, Enrique Fleischmann, Roberto Ruiz, Pablo Loureiro, Rubén Trincado, Ander González, Dani López, Ismael Iglesias, Aizpea Oihaneder and Xabier Díez. The Mahaia collective emerges from the legacy of great chefs such as Irizar, Arzak and Subijana to guarantee the evolution of Basque cuisine. To do so, they support activities that promote sustainability, quality, innovation and the sector's development. Sutondoan is available via Basque Culinary Center’s online shop and is “a letter written with both hands”, focusing on Basque culture and traditions as an “important asset to innovate in products and preparations”.

If you want to find out what’s cooking in the world of Basque gastronomy, you’re in the right place. Mantala Basque Gastronomy has been created to promote Basque gastronomy by exchanging knowledge and cooperation. It is an initiative backed by Basque Culinary Center and Hazi Fundazioa, and seeks to become the digital hub of Basque gastronomy.You may be wondering. What's this about Basque gastronomy? Because the truth is that there are different views and ways of understanding it. At Mantala we want to collect all those ways of seeing our gastronomic culture, from the most traditional to the most modern perspectives. But we also have our own way of understanding it. At Mantala Basque gastronomy is considered to be everything covered by the value chain of this discipline: The product, the processing, the added value catering, gastronomy tourism and the people involved in each phase, with a particular focus on young people. All this without forgetting the identity and cultural essence of Basque gastronomy. Mantala’s aim is to continue reinforcing the positioning of Basque gastronomy in the world, through cooperation. For this reason, this new project brings together different promoters and collaborators with the aim of promoting the development and renown of our gastronomic culture. If defining Basque gastronomy is no easy task, what about words such as “development” or “innovation”? Well, to clear any doubts, we’ll explain what we understand by development. For Mantala, development is everything that encourages knowledge, excellence and innovation in Basque gastronomy. From this new digital space we will support projects linked to Basque gastronomic heritage and others of a more modern nature. The aim is to promote the main defining values of Basque gastronomy in a dynamic and forward-looking way.On the other hand, renown will be sought through the communication and promotion content and activities that will be carried out via different media and channels, with a particular focus on digital media and social networks.  At Mantala we will activate a communication strategy through the creation of quality content with a contemporary approach. This includes launching a website and channels on the main social networks. Likewise, we are planning the creation of a network of collaborators in the different Basque provinces to create quality content linked to the foundational objectives of the initiative. We will seek young profiles with an up-to-date vision of gastronomy, in order to connect with that new audience we sometimes forget about and which speaks a far more everyday and colloquial language. Mantala is created with several central projects that will reinforce the main communicative theme. People: What would gastronomy be without people? Without looks, gestures, smiles, voices… By means of this project we will focus on people and on their know-how, their knowledge and their personal experiences. The aim is to acknowledge, create a community and interpret the future with a global vision.Basque Gastronomy Map: This project seeks to draw a map with local preparations and products from all over the Basque region, to create novelty content and guarantee the transmission of knowledge. We will generate an interactive map where it will be possible to locate everything related to the Basque gastronomic legacy.Basque Gastronomy Meeting: Not everything is digital at Mantala. We like to meet for a drink, some food or just to chat. Particularly in these current times. And we want to get back to physical contact. Which is why we will organise an in-person event that seeks to consolidate the sector, reflect, detect key aspects for the future and work on the renown of Basque gastronomy.